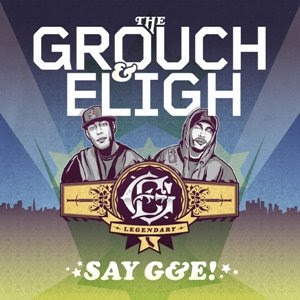 It was about a week ago today when The Grouch and Eligh made their “Intro” into my life. Being a hip-hop traditionalist (Which makes me a hip-hop elitist as well), I was skeptical as to whether they could win me over or not. Though it was not to long into our friendship when they got me to “Say G&E!”. The Grouch and Eligh were an electrical combination; sharp, crisp, and charismatic. Far from one-trick ponies, they would “Push On” with material that kept my ears refreshed and anxious for more. More than satisfied with the two emcee rotation, Blu decides to show up out of nowhere, adding to the already acclaimed mixture. It was a magical performance, like a reunion of “Old Souls” rekindling a chemistry.

So here I am getting my two-step on when, “!Boom!”, just like that, Slug decides to ruin the festivities. While it’d be an insult to call Slug a hip-hop antagonist, he WAS responsible for taking my buzz ’round back and putting her down. The Grouch and Eligh tossed him a lemon, and he refrained from painting it gold. Things were really awkward after Slug left. Grouch and Eligh were in “Denial” about how uncharacteristic that last track was. The night continued with a batch of hollow and forgetful tracks. Eligh was all like “I Know You Wanna Feel”, and then The Grouch was all like “Teach Me The Way”. This was on them though. I am no mentor. I’m a writer, for fuck’s sake.

I guess my silence was exactly what they needed though – they decided it was time to lay all of the chips on the table. They were going “All In”. It was uplifting (in context to what I just had to go through) and precisely what they needed to get back into the groove. The song finished, and Grouch asked for my thoughts. I threw up two thumbs, so they decided to simply “Do It Again”. It was nice having my two buddies back to normal. Given the proper atmosphere in production, these two can spit well enough to never have “Rivers Run Dry”. “No Flowers” are needed in this formula – this group is fresh, most definitely. I am a little embarrassed that it’s only now that I’ve noticed that The Grouch & Eligh have been “Comin’ Up” in the hip-hop industry. While they are “Worried About The World”, I am worried about the middle of their performance, here. While things did pick up at the end, it’s hard to disregard the huge hiccup (!Boom!) that started the train-wreck, sandwiched in by a fantastic start and finish. Inconsistency is “A Sign Of The Times” though, so I’ll give The Grouch & Eligh the benefit of the doubt.

For those with anti-cheese filters enabled on your internet browsers, this is for you. Tracks 1-4 are hot shit. Track 5 is embarrassing. Tracks 6-8 are nothing special. Tracks 9-15 are, at the very least, enjoyable. There’s the album in the most thick of nutshells. It should be noted that Blu is a saint, and that Slug is my enemy on this LP (I love him everywhere else, though). You take the good, you take the bad, you take them both, and there you have, my corny review of Say G&E! by The Grouch & Eligh.